Home > About Our Church > Our History 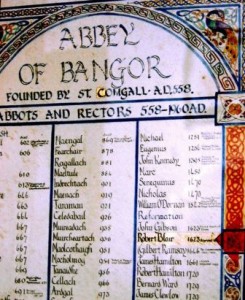 There has been a Presbyterian congregation worshipping in Bangor from 1623 when at the invitation of Lord Clandeboye, Robert Blair came from Scotland to be the first minister. Then he was simply the minister of the Parish of Bangor, but eventually those who followed the Presbyterian Way were forced to separate from the Episcopal church. A memorial window erected for the 300th anniversary of the congregation records the names of the first fifteen ministers.

The present church building is the fourth occupied by the congregation. The foundation stone was laid in 1831 and the spire was added in 1880. It is a superb example of a traditional Presbyterian meeting house.

The pulpit is the focal point of the interior, representing our belief that the church is the people gathered around the Word of  God. the Ministry of the Word is still central in Presbyterian worship.