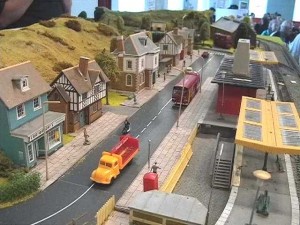 The Model Railway Society was formed in 1989 after a discussion between two Church members who had an interest in railways. An invitation to interested members of the congregation was published in the Church magazine ‘Venture’, from which the club gained its first member. With sufficient interest being shown, approval was obtained from the Kirk Session to run a model railway club, and permission granted from the Church committee to use the ‘old kitchen’ as a clubroom.

Although rather small, it has proved quite adequate. Now that the club was well and truly up and running, work could start on enjoying and promoting the hobby of railway modelling. The first venture was to build a portable layout, now known as the “Burns Layout” (in memory of our late esteemed member Arthur Burns), in time for the North Down Model Railway Society’s annual exhibition in April 1990. Although much modified over the years, this layout has been the mainstay of the Club and has been exhibited on over one hundred occasions. A new digital layout is now under construction. In the fifteen years that First Bangor Model Railway Club has been operating its name and reputation has become well known and respected throughout the length and breadth of Ireland. 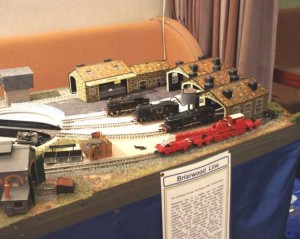 The Club is in fact one of the most active having, in its fifteen years, attended over 100 shows or exhibitions as far afield as Dublin, Downpatrick, Enniskillen and Londonderry, and in locations ranging from fields and tents to schools, leisure centres and church halls. The Club has helped set up a number of other model railway clubs and has supported a large number of charities and fund raising events such as Children in Need, Bangor Junior Gateway, Assissi Animal Sanctuary, Marie Curie, Church fetes and Boys Brigade activities.

Probably one of the most important parts of the Clubs history is its establishment as a social club of the Church, giving fellowship to Club members of all ages. The fellowship has extended outside the Club, through the widespread contacts with other model enthusiasts throughout Ireland, fostering many friendships.

Visit our website to find out more about our Society